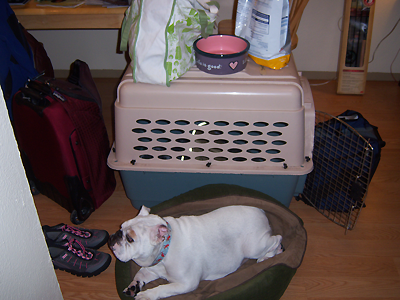 I’d intended the above picture for my bon voyage post.
But then I couldn’t find the cord to transfer the pics to my computer in the pre-trip daze.

And then I flew and drove and ferried and arrived at this overwhelmingly hot land where I instantly acquired a farmer’s tan and the sea water found permanent residence in my eardrums.

This exotic land featured endless dogs–in the restaurants, on the beach, and even in our taxi cab and fishing boat (more on that later likely).

So I did, and I cheated on Sherb with a squat, fiery pitbull named Roja, who slept on blanket-covered chairs and had exotic greenish-yellow eyes (more on that later too).

It was a lovely time, all said and done. And I’m glad we went.

But, as I said above, Dogs Don’t Take Vacation, and upon our arrival after the reverse ferry, car, and plane, we were greeted by a mangy (perhaps literally) pup who had itched and scratched herself raw in our absence. Sigh.

But soon that dog had her sights on the mushroom bed, never mind that my husband hadn’t even fully assembled it after a big bath…and now she sleeps, so soundly, at my side. Her stink eye shuddered for a few hours, tongue firmly in cheek, and real life re-initiated. Sigh.